SSL key exchange with and without encryption 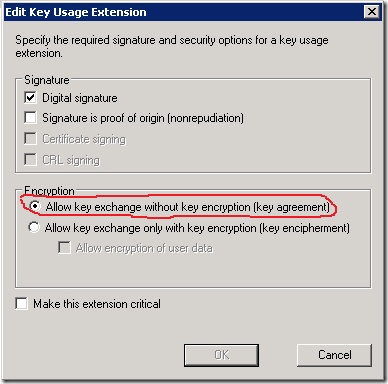 Before I’ll explain the question, we need to become more familiar with the SSL subject.

Generally, the following procedure is performed:

The most interesting point here is random symmetric session key generation and transfer to peer.

Obvious question: who is responsible to generate the key? The answer may not be that obvious. It is impossible for server to be responsible for session key generation. Why? Because there is no secure way to tell that key to client.

Instead, the key is generated by client. Once generated, the client encrypts the key with server’s public key and sends the key to server. Server uses its own private key to decrypt the key and he is ready to start higher-level application protocol. This technique is called: key exchange with key encryption. There is no place for MITM (Man-In-The-Middle) attack, because an attacker cannot decrypt encrypted key as he do not have access to private key (which is held by server only).

This key exchange mechanism may have security issues. Only one peer has control over session key generation. No [perfect] forward secrecy: if secured traffic was recorded by an attacker and later he gets an access to a server’s private key, the hacker then will be able to decrypt session key and decrypt recorded traffic and data.

Another issue (not that important, but anyway): only two peers can communicate via single SSL tunnel. For example, if you need a shared SSL tunnel for more peers then you will have to establish as much as

tunnels with unique session key in each tunnel. Key encryption generally is used in SSL protocol.

However, there is another way to securely exchange session key that supports:

This technique is called key agreement. The most popular key agreement protocols is Diffie-Hellman protocol which can be simplified to the following image (stolen from wikipedia): 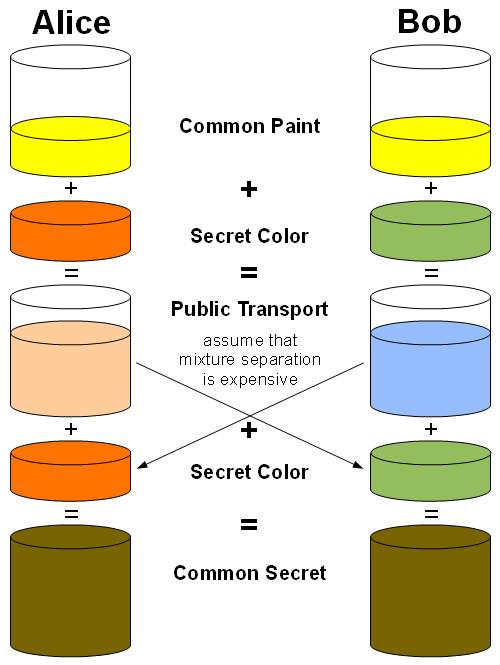 Even if attacker records entire traffic, he will be unable to extract secret color by having mixture and common (public) color.

As you can see, natively Diffie-Hellman key exchange even do not require digital certificates to secure key exchange (however, they are required to authenticate peers). By using this technique, you can easily connect as much parties as you wish. Actual DH protocol implementation is more complex and can provide additional security features (like perfect forward secrecy), main principle is the same. Key agreement protocols are used in TLS protocol.

Today we discovered the difference between two common session key exchange techniques with and without key encryption, their advantages and disadvantages (where possible). Now we can conclude that key agreement key exchange protocol looks more interesting and preferred for secure connections.

Thanks a lot, Vadims, I was looking for long time for this :)

Thanks for this article!

However - why do you need the configuration in the template - if key encryption/agreement is defind by the asymmetric algorithm chosen?

is there any meaning for 'key agreement' while you use RSA keys?

> is there any meaning for 'key agreement' while you use RSA keys?

yes. In fact, RSA is the only common asymmetric algorithm that can do both, key exchange and key agreement. EC-based keys use key agreement only and this setting is hardcoded in template and you cannot change this value.

> why do you need the configuration in the template - if key encryption/agreement is defind by the asymmetric algorithm chosen?

in fact, it is a bit more complicated. When RSA key is used, exact method (exchange or agreement is negotiated during TLS handshake).

I Just played with the Cryptography tab on the template and saw what you wrote.

I always enjoy reading your stuff - Thanks!