Today I have published a new version of PowerShell Cmdlet Help Editor which includes only one major change and number of minor changes. 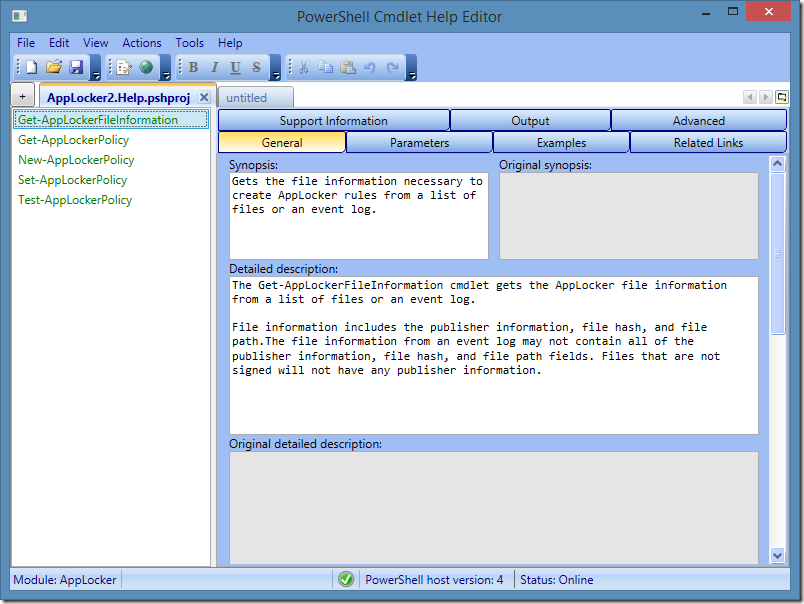 Closable tab control is adopted from this blog series: WPF- TabControl Series. I significantly reviewed and rewrote the code, so it is (at least, should be) more stable. Common tab hotkeys (Ctrl + T and Ctrl + W and Ctrl + Tab) are added too.

Besides this main change, several important issues are addressed too.

1) There was an issue in the inherited code, which incorrectly read existing XML help file. It separated topic paragraphs by using ‘\n’ character and generated XML didn’t looked as expected in the PowerShell console. I changed the code by reading paragraph by paragraph and separate them with double ‘\r\n’ sequence. That is, in order to create a separate paragraph, press Enter button twice. So, you can visually identify and construct paragraphs which will displayed correctly in the PowerShell console.

PSHPROJ transition is done automatically: load existing project (module must be online and loaded) and save it. You are not allowed to save project or generate XML if the project file is not upgraded and the module associated with the project is offline (not loaded).

Since, it is Beta version, I would like to ask you to test this version and report issues on project page on CodePlex. I’ve tested this version as much as I could, but certain things may be broken.

This is no longer available.  I found it on github, but it is only source with no downloadable release.  Is there one available?

Yeah, sounds like it was burried there. When I get a time, I will upload compiled version.