Hello folks, CryptoGuy is here again. Today I’ll talk about the most common ways to violate default SRP configurations and how to protect SRP against them.

Depending on various factors, other folders will present as well. Here is a screenshot of Temp folder ACL: 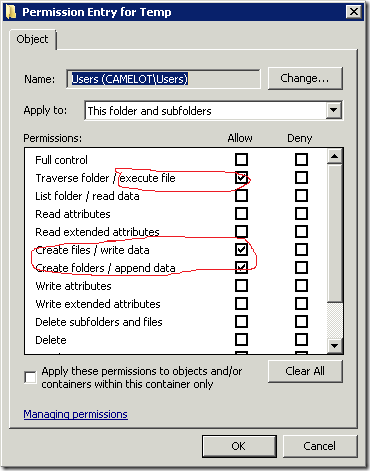 while you can’t access folder directly, you can use command prompt to copy executable and launch them. The same story with printer spooler folder. There might be other custom folders in system folder with similar permissions. To enumerate all folders with users write access you can use, for example, AccessEnum utility from Sysinternals pack.

How to prevent these attacks? It is tough question. There are few ways. You can create explicit rules with Disallow security level. I doubt that there is a reason why users may want to launch executable from printer spooler folder. Another solution is that in certain cases you can redirect these folders to other locations (outside of system root folder). For example, you can redirect printer spooler folder to another location: http://support.microsoft.com/kb/318748.

Regular users cannot override these variables, because they don’t have sufficient rights. However, it is possible to override them (actually, all environment variables) for a single process. To test this trick, open Command Prompt (no elevation is required. Standard user permissions are sufficient) and look what I’m doing:

look, I changed %programfiles% variable location and tested whether it is changed. Now, you can run anything on C: drive. Of course, this affects only particular Command Prompt session, therefore you should launch files only via this CMD session. Once you close it, variable value will be returned back to it’s original value. To prevent this sort of attacks — do not use environment variables in path rules. Instead, use absolute paths or read paths from registry. You can use default path rules as example.

this trick doesn’t work against Applocker, because Applocker do not use real environment variables, but their own (even though, semantically they are similar or equal).

When we explored SRP configuration UI I told you to remove LNK (shortcut) extension from Designate File Types list. Now I explain why. If SRP screens LNK files, you have to create multiple exception rules to allow users to run applications via shortcuts. For example, you will have to allow shortcuts for user desktop, start menu:

Now SRP allows users to run applications by using shortcuts on their desktops. However, SRP can’t differentiate files and folders. Therefore some user can create a folder on the desktop, for example “MyFolder.lnk”. LNK in the folder doesn’t mean anything, it is just a part of the folder name, not a folder extension (folders doesn’t have extensions). In this case, user will be able to run anything from that folder and any subfolder. Sad, but true. It is not only LNK extension issue, this is general path rule issue. This is why I recommend to not use path rules for locations where users have write permissions.

Users can violate SRP with certificate rules. In fact, Certificate Rules are not native rule type for SRP, it is separate Windows mechanism and SRP just provides an UI. That is, certificate rules can be created and used even if there is no SRP.

when Windows 7 released I faced a lot of issues in TechNet forums with SSTP VPN and Remote Desktop connections that complained about inability to verify certificate revocation status. This error was caused due to the fact that root certificate was installed in the current user certificate store, but CCE didn’t trust them. Since SSL certificate chain is partially trusted (when you open SSL certificate on the desktop, you will see that there is no error messages about certificate trust), revocation checking is not performing and fails with RevocationOffline error.

Fortunately there are numbers of ways to prevent such attacks: 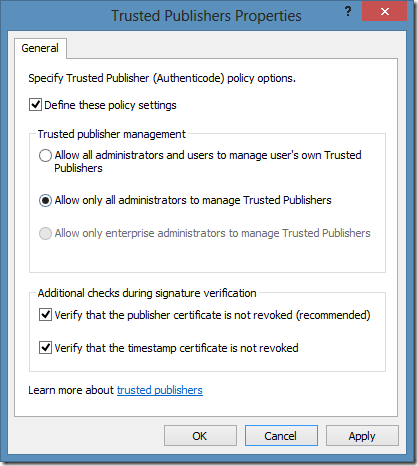 When you switch radio button to middle position (Allow only all administrators to manage Trusted Publishers), users won’t be able to add certificates to Trusted Publishers container, thus preventing them to establish explicit trust to a particular signature (even if the signing certificate was issued by a trusted authority)., thus making administrators the only who can create certificate rules. Unfortunately certain applications relies on this container and may stop working after enforcing this setting. For example, I faced an issue that Windows Live applications (Messenger, Live Writer, Mesh, etc.) stopped working. On Windows XP/Windows Server 2003 systems this setting prevents system update installation and so on. 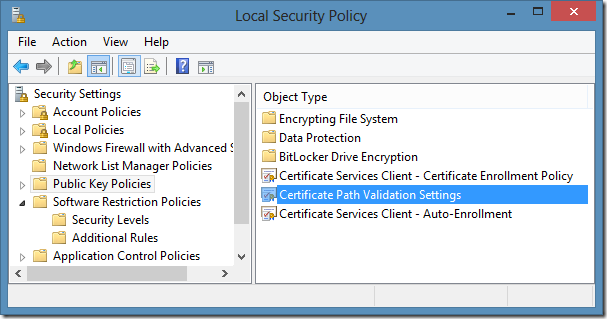 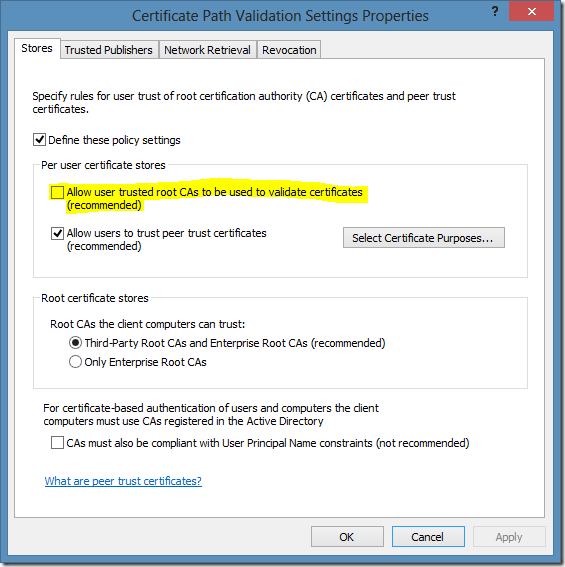 In these settings unmark the checkbox on the following option: Allow user trusted root CAs to be used to validate certificates (recommended). In this case, regular users won’t be able to establish a trust to a custom root certificates. However, this setting do not prevent users from creating explicit trust to a certificate issued by a trusted authority. For example, a user may purchase a code signing certificate from DigiCert (they have one of the cheapest code signing certs on the market), sign any code/application, add signing certificate to Trusted Publishers container in the current user certificate store and run his own signed software without administrator approval.

As you see, we have two options to secure SRP, however each has some drawbacks. First is more secure, but may prevent to run some business applications. If you are running Windows Vista and newer systems and do not use Windows Live applications, you can test other applications with this setting. If they work as expected, then you can use this setting. If you are using Windows Live (for example, to communicate with clients and partners via Live Messenger) or certain business application stops working, then use second option and be aware about mentioned drawback.

Didier Stevens pointed me to a blog post that describes how to use scripting to alter all SRP and Applocker rules for a single process. Previously there were no ways to mitigate such attacks and SRP was deeply vulnerable. Thanks to Didier (again) and his cooperation with Microsoft, because we have an update that resolves this issue — You can circumvent AppLocker rules by using an Office macro on a computer that is running Windows 7 or Windows Server 2008 R2. As per CreateRestrictedToken function documentation, there is a SANDBOX_INERT flag that is fairly self-descriptive: If this value is used, the system does not check AppLocker rules or apply Software Restriction Policies. For AppLocker, this flag disables checks for all four rule collections: Executable, Windows Installer, Script, and DLL. When KB2532445 is installed, there is no way to use this flag without having Local System and/or TrustedInstaller permissions.

To those who want to practice in this, here is a PowerShell implementation of Didier’s C++ code:

The function accepts only path to a file (executable).