Hello again! Today I would like to discuss about digital signatures and signature usage questions.

As you know the signature guarantees that the electronic document wasn't changed after signing process. This is a useful feature for sensitive data that may be changed during transfer over network. For example, Internet. There is one well-known attack named Man In The Middle (MITM). In MITM, malicious user intercepts document change some data and transfer to the original recipient. If the document is originally signed (by sender) the recipient will attempt to validate document signature and will see that the document was changed during data transmission. This would invalidate the document.

What is the asymmetric encryption? This encryption type is based on two cryptographic keys — public (this key is available to any user without restriction) and private or a secret (held by the key owner. No one except the owner should know this key) key. These keys are mathematically related so if something is encrypted by one (public or private) key then encrypted string can be decrypted by corresponding second key (private or public). These mathematically related keys usually referred to key pair. In other words, anything that is encrypted by a public key can be decrypted by corresponding private (or secret) key only and vice versa.

How the signing process work?

This is what digital signatures does! And here is a simple signature structure: 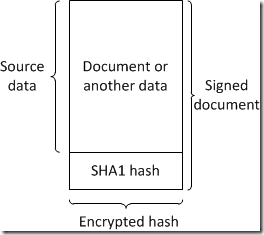 Pretty simple (actually there is nothing complex).

For what reason there are so many trust levels? Perhaps it should be simply Trusted/Untrusted? Yes, for certain scenarios this is enough, but not always. Applications use various trust levels depending on internal requirement. As there are many trusted CAs they issue a lot of signing certificates to various publishers. However it is common when we don't want to trust any document signed by these publishers. 4-level trust model allow us to trust only certain publishers and no more.

Suppose the following scenario. You have a signing certificate and you sign a lot of documents. Once, the certificate is expired, you receive a new one and continue document signing.

To address this issue an additional service was introduced -- timestamping. According to wikipedia:

Trusted timestamping is the process of securely keeping track of the creation and modification time of a document. Security here means that no one – not even the owner of the document – should be able to change it once it has been recorded provided that the timestamper's integrity is never compromised.

Usually timestamping services are provided by a trusted 3rd party authorities. They have a special device that synchronizes current time with world time sources and have signing certificates for timestamp signing. Signer calculates document hash (usually during signing process) and sends it to a timestamp server. Server append current date and time to a received hash and sign resulting data with its own timestamping certificate. Resulting message is called a signed timestamp. After that server return timestamp back to signer and signer attaches the timestamp to a document signature. 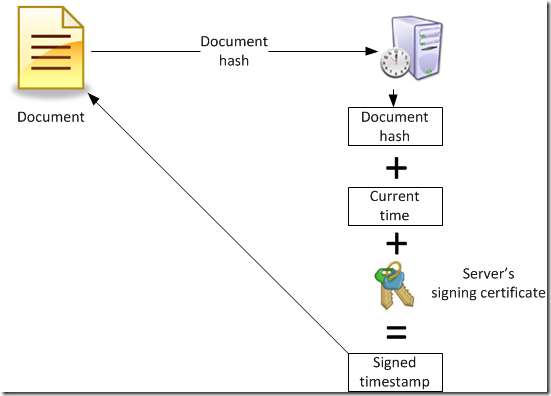 And how the timestamp is attached to a signature: 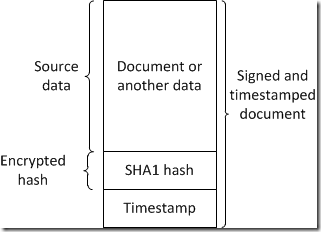 As you see the timestamp is not a part of a signed document hash (though this is a part of digital signature) so you can update only timestamp. But if you re-sign the document the timestamp will be updated (or removed if during re-signing process you decided to not use timestamps). Since both encrypted hash and timestamp contain document hash it is not possible to detach the timestamp and attach it to a different document to falsify actual signing time.

Next two sections (where each of them contains two subsections) will illustrate the signature validation outcome in different situations.

The rule here is pretty simple: signatures can be validated only in a signing certificate's validity period time frame. If you attempt to validate signature (non-tampered) in a time frame between 1 Jan 2015 and 31 Dec 2015, validation will succeed. Any validation attempts beyond certificate's vlidity will fail. This is because we do not have any information about when signatures were created.

The bad news here is that when you receive new signing certificate (as a replacement of expired one), you would have to re-sign all previously signed documents, because they are no longer valid.

In short, we can trust timestamped signatures that were made with signing certificate's validity period and it doesn't matter when we perform this validation.

Here we extend previous example by adding an unfortunate case: the signing certificate was stolen/lost and eventually revoked.

You have a document signing certificate with validity: 1 Jan 2015 - 31 Dec 2015. The certificate (and its private key) was lost at 1st August, 2015. You took required actions to immediately revoke the certificate. The following two sections will illustrate what will happen with the signature at various time points. First section assumes that you made signatures without timestamping and second scenario assumes that you made timestamped signatures.

The rule here is pretty simple. If you attempt to validate signature between 1 Jan 2015 (signing cert's start validity) and 1 Aug 2015 (when the certificate was revoked and placed in CRL) we will trust the signature. However, after 1st August the trust will be ended. Once we found signing certificate in CRL, we will invalidate *all* signatures made by revoked certificates.

This is because we don't have any information about when particular signature was created, as the result we invalidate all signatures. Even if they were made prior to certificate revocation. Remember, that timestamps weren't applied, so this information is not available to us. In order to restore the trust to previously signed documents -- we have to re-sign them with new signing certificate.

In general, if the signature is timestamped, we can trust it if the signature was made within signing certificate's validity period. However, our scenario has a condition: the certificate was revoked. Since revocation date is presented in CRL and signature creation time is presented in the timestamp, we can safely trust all signatures generated between signing cert's start validity (1 Jan 2015) and till revocation date (1 Aug 2015). We can't trust any signatures created after 1st August, because the control over the key is lost.

The unobvious point here is that we can successfully validate signature even after signing certificate expiration (and the cert is actively listed in the CRL), because we know that the signature was made in the period when the key was not compromised.

This leads us to another revocation management best practice:

This section provides a quick table that shows signature validation status under all above described conditions.

as you see there is only one case when simple signature remains valid — while the certificate is time valid and is not revoked. In all other cases the signature will become invalid. But timestamped signature remains considered as a valid even if all certificates in the signing and timestamping chains are expired. Therefore you should timestamp your signatures each time you sign something as it is possible. Some time ago (when I wasn't educated in PKI) I asked a question — "for what purposes Windows is shipped with expired root certificates in the Trusted Root CAs container? They are expired and there are no reasons to trust them!". And the answer was pretty simple — for timestamped digital signature checking purposes. Therefore if you issue signing certificates by your internal CA — don't remove your root CA certificate after CA certificate renewal.

Hello Can you explain more the last part about expired root certificates? "For timestamped digital signature checking purposes". I don't understand this part. Thanks

HOw signature is still valid ifor a given file if timestamp cert is revoked with key compromised ? bacause if hacker  is a person who has signing cert private key , and now he has timstamp private key (Altough key has been revoked) . he can sign a file and put timstamp with a date(in which timestamp cert was valid).

so ideally this file should not be trusted .

> HOw signature is still valid ifor a given file if timestamp cert is revoked with key compromised ?

you are right. I overlooked this point and updated the table to reflect correct behavior when timestamping certificate is revoked.

The TSA signing key MUST be of a sufficient length to allow for a sufficiently long lifetime. Even if this is done, the key will have a finite lifetime. Thus, any token signed by the TSA SHOULD be time-stamped again (if authentic copies of old CRLs are available) or notarized (if they aren't) at a later date to renew the trust that exists in the TSA's signature.

> How can you trust the timestamp (and consequently the signature) after its supporting certificate has expired?