Posts on this page:

This whitepaper is a structured compilation of a large number of Microsoft official documents and articles from TechNet and MSDN sites. Full reference document list and full-featured printable PDF version will be provided in the last post of this series.

What is Certification Authority Root Signing?

Consider the following scenario: You work for an organization that requires many digital certificates. You want to ensure that these certificates are trusted by other organizations, such as external partners and customers. For example, you might want to use a code signing certificate for an application or a digital signature certificate for signing a document or email.

If instead, you subordinate your PKI to one of the commercial PKI root certificates that are trusted by Microsoft Windows installations, you do not have the same problem. By default, Microsoft Windows applications install a set of predefined root CA certificates (well known commercial root CAs), which certificates are trusted on any Windows installation by default. For example, if you access https://login.live.com/ web site, no additional actions are required from a user. This is because SSL certificate is issued by a trusted CA.

To overcome such an issue, you may decide to implement a PKI that utilizes the trust of a well-known and trusted PKI. This allows your organization to issue certificates that can be trusted and recognized worldwide.

X.509 Name Constraints certificate extension – all you should know

Hello S-1-1-0, PowerShell CryptoGuy (aka @Crypt32) is here again. Today I want to discuss about X.509 Name Constraints certificate extension. It is not widely used, but sometimes it is necessary. As extension name depicts, it is used to provide constraints or restrictions to certificate subject and subject alternative names (SAN) extension. 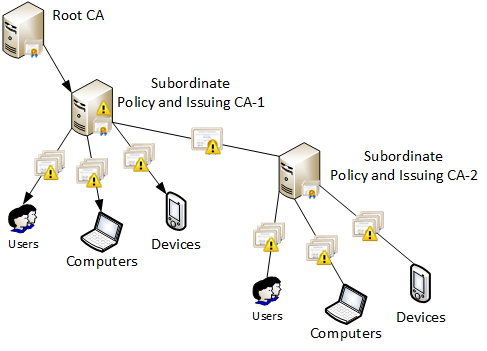 How to read ADCS Enrollment Agent/Certificate Manager rights in PowerShell

Recently I was asked about how to read Enrollment Agent Rights and Certificate Manager Restrictions in ADCS. At first, I would like to make a little introduction about the subject.

With Active Directory Certificate Services (ADCS) you can designate one or more enrollment agents to enroll on behalf of other users. One of the most common scenarios is smart card provisioning. Suppose, you purchased smart cards and plan to issue them to employees. You will designate one or more highly trusted persons who will:

SHA1 to SHA2 transition: do it properly!

Almost everyday we hear about SHA1 deprecation policy. Many commercial CAs now sign end-entity certificates with SHA2 (actually, SHA256) and. Some of them upgrade issuing CAs to SHA2. Many security administrators  move their private CAs and certificates to SHA2 signatures. Unfortunately, not all do this migration correctly. Companies just configure their CAs to sign certificates with SHA256. Is this enough? Actually, not.